Episode 53 – Learning to Embrace Life as a Military Spouse

On this episode, I’m joined by Navy spouse Bryce Langley, who’s sharing some great thoughts and wisdom about military spouse life, military marriage, tips for getting through deployments, the importance of mentorship, and so much more. (Along with some ways that spouses’ groups can better reach out to male military spouses!)

Bryce and his wife Tracy had been married nearly a decade when she decided to go into the Navy. As you’ll hear, even though he came from an Army family, Bryce came to military spouse life very reluctantly! He’d been raised near Fort Bragg, NC, and saw firsthand the effects military life can have on families, and he was not quite ready to sign up for that. They’ve now been married over 13 years, and you’ll hear about how Bryce came to not only accept military life, but embrace it. He talks about how he decided to support Tracy’s career as well as connect with other military spouses through the Family Readiness Group. He’s completely honest about the journey so far, and if you’re struggling too, I think you’ll be so encouraged by his experiences! He says:

“We almost didn’t make it. Our marriage nearly fell apart. We both had a lot of scars. But it came down to our determination. One day we’d had a particularly bad fight….my mentor at the time said to me, ‘Are you done trying?’ He said, ‘I want you to read I Corinthians 13, and then I want you to start living it. Because if you want your marriage, you’ve gotta fight for it. And you’ve got to get over and let God do what He’s going to do.’ That began a 4-year process of us healing a nearly destroyed marriage.”

About getting involved with the military spouse group on his base:

“That was the whole reason I connected [with the FRG]. If I’m gonna do this, if I’m gonna be a cheerleader for my wife–as horrifying of an image as that is– then I need to be all in, and not be that reluctant person out in the corner, folded arms, huffing and puffing that I’m here against my will. If I’m gonna do it, let’s do it, and I’m going to be the best I can at it.”

Bryce does not have public social media, but if you’d like to comment or get in touch with him, just reach out to me! Mentoring is very important to him, and he highly recommends military spouses get involved with the Military Spouse Advocacy Network. He says,

“It’s an organization in which older, more seasoned spouses become mentors to those who are new to the game. It includes all military branches, including the Reserves and National Guard. You fill out the survey, they pair you with someone, and you do life together. I have made several friends in this network and have received great guidance from them as my time as a milspouse.”

Whether you’re a new or more ‘seasoned’ military spouse, I feel certain you’ll come away with some helpful, encouraging info from this episode. 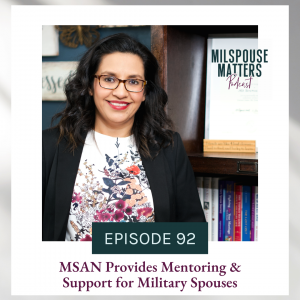 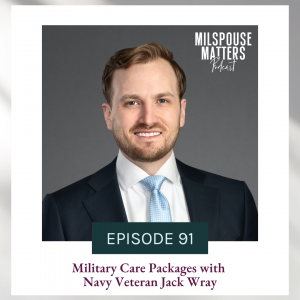 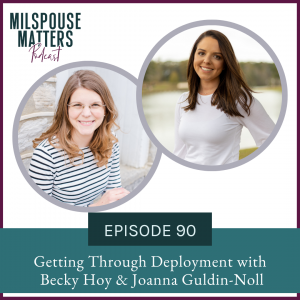