How I Started Running at Age 45 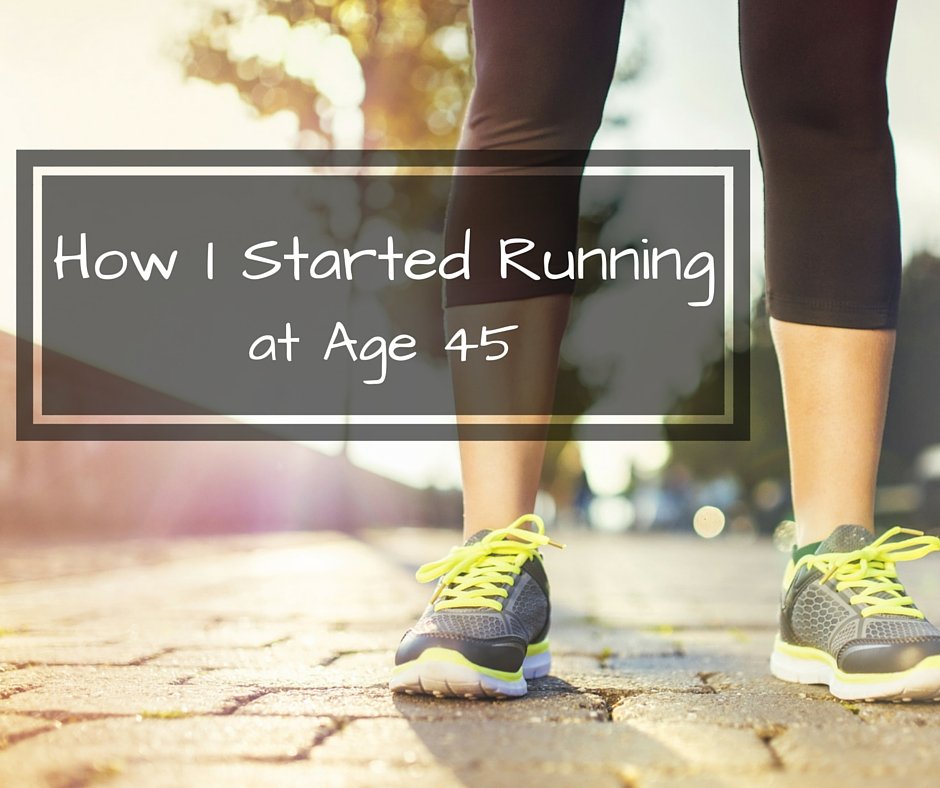 I’m no spring chicken, slow, and prone to injury.

And I’m training for a half marathon!

While that seems like a nonsensical combination, let me back up a bit. I’ve tried, many times over the years, to “be a runner” with mixed results. Either pain, injury, or the busyness of life would end up sidelining me. Being married to a military guy who runs for fun like a big weirdo doesn’t really help me. God bless him, he tries, but sometimes his encouragement can go something like this scenario from when I first began:

(Us running together,  a term I will use loosely. Really more like me shuffling, him running ahead, realizing I’m way behind and looping back to call out a few “encouraging” words):

Him: “You should try to breathe more deeply.”

Me: Between breaths: “I wish I was huffing, it’d be a lot more fun than THIS.”

Me: Concentrates on imaginary point on the horizon, tries to keep from passing out.

A friend asked me recently what motivated me to try running again after all the times I’ve tried and failed. Thinking about it, I realized it was a combination of a couple of things: a nagging Achilles injury and seeing a photo of myself last spring.

A couple of years ago, after months in a walking cast after I’d injured my Achilles hiking, I said off-handedly to my podiatrist, Well, I guess that cuts out running, snicker-snicker-har-har.

He looked at me seriously and said to my surprise, “Absolutely not.”

Darnit, there went my free pass! An avid runner himself, he went on to give me some stretches and strengthening exercises, referred me to physical therapy, and said there was no reason I couldn’t run if I just realized I’d always need to baby my stubborn Achilles. Honestly, I put that in the back of my mind and was just thankful to be able to walk and hike again without pain.

Fast forward several months, past another military-mandated move and my usual emotional eating and weight gain that typically go along with any big change. About a year ago, I saw a pie-faced photo of myself and couldn’t believe it was me. (While this seems to fly in the face of my recent post Why Your Life Doesn’t Need a Makeover, bear with me!)

Feeling like I was unrecognizable and realizing that my typical tactics of skipping lunch and walking more were no longer cutting it on this middle-aged bod, I knew it was time to try again. And apart from appearance, I didn’t like how I felt and didn’t want to keep feeling that way.

So I came up with the crazy notion to start running at age 45.

It was not easy. In fact, it sucked. Thankfully, I stumbled upon Alexandra Heminsley’s book, Running Like a Girl.

Even though she is much younger than me, what she described about her running beginnings–the embarrassment of running in front of other people, the physical pain, doing too much too soon, etcetc–was exactly where I found myself. When I began running, I would only run round and round my block, in my black yoga pants, and only after dark. I’d walk if I saw a car or another person approaching because I was so self conscious.

So if you’re a beginner at running, no matter what your age, here are a few tips that worked for me.

Look for a community. If you know some runners in person, ask if you can pick their brains about trails, paces, and so on. I found great online communities through Facebook and Instagram as well, and their support and encouragement helped me SO much in the beginning.

Take your time. My goals were very, very small. I couldn’t even run 1/4 mile without stopping for breath or to walk when I first began. So I made small goals: try to go a little further each time. Then, run a whole mile. Run a mile and a half, run two miles, and so on. This process took MONTHS and I gave myself permission to walk when I needed to or skip if I didn’t feel like running.  Last fall, when I surprised myself by running 5 miles one day, I suddenly realized I could probably do a 10K. So I did! I signed up for and completed the Super Woman Run through the Women’s Running Community I’d discovered on Instagram.

Don’t compare. I was so embarrassed to run outside, as if anyone driving by would realize how out of shape and what a bad runner I was. I also live on a military base, so there are lots of amazingly fit people. I was the lady shuffling along in an oversized tee and yoga pants. Now when I see other obviously beginner runners, the ones usually avoiding eye contact, I want to high-five them and say, “You get it, girl!” Because I realize no one was really thinking about me at all. Runners are some of the most supportive people I’ve come across. And let’s be honest, when they’re running, they’re usually so focused on their own breathing, pace, or even thoughts that they aren’t considering what someone else looks like. (And if they are, I just don’t care anymore!)

Get the right gear. My podiatrist recommended Saucony for my foot issues, and I went through several pairs of those. Unfortunately, they stopped making my favorite shoe, and I recently jumped on the Brooks bandwagon. So far, so good! Good shoes are expensive, but so worth it. For big chested gals, I cannot recommend enough the Enell High Impact Sports Bra. These are not dainty or pretty, but I haven’t found anything else that works as well.

But don’t complicate it. Sure, you need good footwear and comfy clothes. That’s enough to start! Don’t worry about fancy water or weight belts, fuel, Garmins, or any of that right now. Just go!

Set goals. My initial goal was to be able to run a mile. Then longer. The 10K in December gave me a training goal for the fall.  I’ve been running consistently for almost a year now, and I’ll be doing my first half marathon this spring. That is keeping me from sitting on my rear too much over the winter. I know I’ve got to put in the miles between now and then! I’m a task-oriented, goal-oriented person, so that works for me. Running a race might not be it for you, but what might be? New shoes? A shopping day? Some other reward for getting further in your running? Figure out your own motivation and then run after it! (haha)

Embrace the suck. I am not a cute runner and I am not a fast runner. I get ridiculously red-faced and sweaty, regardless of the weather, and someone usually passes me when I’m out on the trail. BUT, if I’ve learned anything as a military spouse, it’s that hard times come and go and to embrace the suck. When I don’t fight against it, the time passes more quickly and sometimes I even forget I’m running for a mile or two! (I would not have believed this months ago).

Find encouragement. I don’t know very many in-real-life runners, but there is loads of support to be found out there: podcasts, blogs, or just do a quick search on Facebook or Instagram and you’ll come up with tons. A few of my favorites (I get nothing for these endorsements; these truly helped me!):

The time will pass anyway. In 6 months, will you wish you’d started now instead of putting it off? The time is going to pass anyway. Why not go ahead and give it a try!

Me after running my 10K. I toldya I get red and sweaty! I cried when I finished the 6.2 miles, as this had seemed like an impossibility such a short time before.

Here’s the purty medal I got for finishing it. Yay, me!

No excuses!! This was a 20 degree day and I made myself get out there. I’m not a fan of the treadmill, and I will run on the indoor track if I need to, but I’d much prefer to be outside.

If you’ve thought of starting running and hesitated, I hope you will try it out. As a self-pronounced running hater in the past, I’m surprised by how much it’s grown on me and how much I enjoy the solitude of running and the clear-headedness I have after. Even if you’re over 40, you can do this!

Did you start running a bit later in life? I’d love to hear your tips!